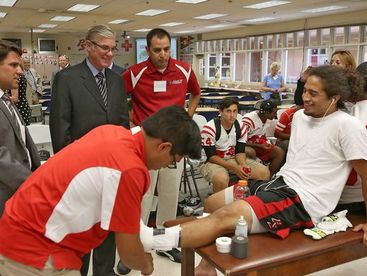 California Superintendent of Public Instruction Tom Torlakson praised the career-minded curriculum at two desert high schools on Friday, insisting that such schools will help reinstate California as a premier state for quality education.

“The kind of programs you have here (are) evidence that we are moving in the right direction,” Torlakson said, speaking at La Quinta High. “We know that when someone begins to dream of a particular job pathway, they get more motivated. They understand the connection between the science, the math, the music, the civics and the history. There is a relevancy that keeps them excited and engaged in school and give them a focus. It’s learning with a purpose.”

As Torlakson spoke, the lessons continued. Behind the state schools chief, a kitchen doubled as a classroom. More than a dozen La Quinta students in white aprons crowded around a countertop, watching as a chef walked them through the basics of a clean kitchen. A few minutes later, a culinary student, Jaxon Mester, handed Torlakson a basket of homemade bacon cheddar fries straight out of the oven.

The LQ High culinary arts institute, which opened last school year, is a state-of-the-art facility, rivaling a kitchen at a high-end restaurant. Torlakson also toured the public safety academy’s forensic lab, and the school’s health academy, which looks more like an emergency room than a high school.

La Quinta Principal Rebecca Cook said it was an honor for Torlakson to visit.

“I know there are a lot of schools that have (career technical education programs),” Cook told the state schools chief as the tour began. “And we are extremely proud of ours.”

After leaving La Quinta, Torlakson went to Palm Springs High, where he visited academies dedicated to sports medicine and business. In the sports medicine classroom, senior students were wrapping the football team’s ankles in athletic tape, prepping them for a Friday night game in Redlands.

Allan Ahorro, a student who specialized in taping ankles, said he was proud to show off what the academy had taught him. Last year, Ahorro won third place in a national sports medicine competition.

“I guess I built this skill over two years,” Ahorro said. “I’ve just kept practicing and practicing because I wanted to master it.”

In addition to touring the career academies, Torlakson held town hall meetings at each school, answering questions about the shifting state of education funding.

California recently introduced the Local Control Funding Formula, a new method of funding schools that gives more decision-making power to local school districts. Each district will receive millions more than before, and the state has erased many mandates that dictated how the money should be spent.

“It’s truly a paradigm shift,” Torlakson said. “It’s the ability to make a decision and not be trumped or overruled by some higher authority.”

Although many school districts have praised the promise of local control, the new funding formula has raised some concerns about the fate of career technical education. Potentially, some school districts could decide to move money away from the same kind of career academies that were praised on Friday. Torlakson said he wasn’t worried about this possibility.

“I am fully confident that these programs so prove their worth — students are so engaged, and so focused on their futures ... that the kind of work going on at the local school board level will protect those programs. I think they will expand.”

Reporter Brett Kelman can be reached by phone at (760) 778-4642, by email atbrett.kelman@desertsun.com, or on Twitter @TDSbrettkelman.

PALm's Allan Ahorro and Asia McSwain on the Radio

Video Encourages Business Leaders to Engage in College and Career Readiness
A NEW Coachella Valley Economic Partnership video showcases how local schools and businesses collaborate to provide students with life-changing career explorations, career academies, job shadows and internships, and scholarships and support. A key tool in promoting the Regional Plan for College and Career Readiness, the video will help the CVEP Business Engagement Committee attract businesses to the program. Visit CVEP.com to view the video and download our Workforce Excellence brochure. Call 760-340-1575 or visit us online for more information. 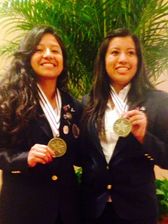 Palm Springs High School continues to be at the forefront of health occupational training.

Four earned national medals in CPR/first aid and sports medicine in the Health Occupations Students of America, more than any other year.

"Last year at nationals, Palm Springs came back with two medals, both in sports medicine," said Flores, now a two-time medalist who will study biology and is leaning toward a career path in physical therapy. "This year, we doubled that, and I believe that winning these medals has opened doors for the program for even more."

Flores noted that at the state level Palm Springs swept the sports medicine event, placing one through seven.

The top three qualify for state, so the team made a concerted effort to diversify this year.

"In my first year in HOSA, I was in medical terminology, then switched to CPR and first aid last year," said Molina, who interned at Desert Regional in the emergency room and will attend UC-Irvine. "I know we're really good at sports medicine, but now we have a first place in another category. This is growing a lot, and we brought the biggest group this year.

"You learn so much, then you have the chance to intern at the hospital, or at the animal shelter or at a dentist office. Now I hope to major in biology and go to medical school."

She will be joined at UC-Irvine by her teammate Buenrostro and didn't realize the two had decided on the same college.

"We were fourth in the state last year so we missed at nationals, but we came in second this year," said Buenrostro. "We both work separately. Deni did the CPR and I did a live person assessment for heat illnesses."

Buenrostro said she was monitored by the judges as she calmed her patient, shredded excess clothing and shoes, then tried cooling them with a spray of water on their face and neck while checking other vital signs.

According to classroom teacher Michael Ventura, the school's athletic trainer, the numbers for the program continue to grow with academy-level schools now specializing in health occupations.

"It's difficult for the kids to qualify to win state medals and for us to sweep in sport medicine, then win three at the national level shows that we are one of the stronger chapters in the state," Ventura said. "We also placed fifth overall in team competition, and that shows how strong we are."

The top three from each state in categories such as CPR, veterinary science, medical law, pharmacology or public health place. Most are written tests, but for sports medicine and CPR, an unknown addition that could involve anything from taping ankles to medical evaluations is added. This year teams were sent to perform in a live situation at EPCOT Center.

Next year, Ventura said that Palm Springs hopes to qualify many more for the nationals because it will be held in Anaheim.

"We just don't want to go to nationals, it's all about medaling, and we hope we can bring the biggest group ever," he said.

Another local school that is poised to make a showing in 2015 nationals is Cathedral City. The Lions sent 10 to this year's event, but no one advanced to the medal round.

Samantha Gumbish: 4th in state in Community Emergency Response Team (CERT) and went to nationals to represent California due to a medal team not being able to attend.